I got a QR Code Tattoo!

I got my first ever tattoo this week. This is something I had been considering for a long while – about 5 years. I wanted something that reflected my obsession with technology, something that looked cool but also had a function. If you’ve already read the title, you’ll know that I settled on a QR code.

Let’s start by talking about what this thing actually is. A QR Code is a two dimensional barcode that takes the form of a grid of pixels. The size of this grid depends on the type of code, the complexity of its data and the amount of error correction. A QR code scanner can read the grid image, turn it into a series of 1s and 0s and decode it to get at the information contained within. 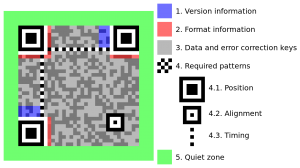 Explanation of how a QR code works – from wikipedia

One of the useful parts of QR code design is its error correction. First of all, a QR code will basically never give you the wrong data – it will either give you the data its supposed to or give you nothing. For a tattoo, the worst case would be my code suddenly linking to something else, but thanks to the error detection all I risk is the code doing nothing at all. Secondly, and most importantly, there is built in redundancies in the code – the code can be damaged or obscured and may still function. This is very important to a tattoo as it lowers the risk of human error or even aging from rendering it useless, but too much error correction can make it harder to get right as I’ll explain in a bit more detail later.

As I mentioned, not only does the tattoo look cool but it has a function. I have a url on this website encoded into the tattoo – http://further-reading.net/tattoo.html. When someone scans the code it will open up this page on this website. Right now I have it set to redirect to the homepage, but in future I can change it on a whim to redirect elsewhere or even have its own content.

First of all, before I went close to a needle I wanted to make sure I’d like having this on my body forever. A friend of a friend suggested his usual process – make the image his phone background for a few weeks. If after a few weeks he isn’t sick of the image it’d probably be fine. That wasn’t really a good idea for me though – a QR code makes a pretty bad phone background. I opted instead to use a service called inkbox to create a temporary tattoo. The tattoo lasted about a week and, due to technical limitations, wasn’t actually a functional QR code. It took about a day of wearing this for me to commit to the idea. 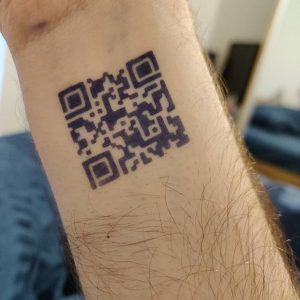 When I was looking for an artist in my city to perform this work I knew I needed someone highly skilled. Even with the error correction it needed a precise hand and a meticulous perfectionist to get as many of the pixels right as possible. After asking around a specific artist was highly recommended – Vita Klaro of Inkoholiks Cork. The main thing that drew me to Vita was that she was highly praised for portrait work, which I figured meant she was good at capturing details of an image.

The process itself was pretty intense for a relatively small tattoo. Due to the high error correction version I chose the pixels were pretty small which made it a much harder job. The session lasted about two hours and Vita was absolutely exhausted by the end of it. We had already come to terms with the fact that it was unlikely to scan at the end due to the difficulty in tattooing such a design accurately. Even without the function though the work was great and I was happy to have such a good looking tattoo regardless. When it successfully scanned at the end I think Vita was probably happier than I was!

This was my first ever tattoo so I was worried about if it might be painful – going in my expectation was that I’d flinch and ruin the work. I was surprised that it wasn’t really painful at all, in fact I found it pretty pleasant. Initially I wanted it on my wrist, like with the inkbox one, but I chickened out and had it placed higher on my arm just in case the thinner skin and bonier area made it too painful. In hindsight I think it might have been grand and if I could back I’d probably man up and have it placed higher.

A Study in Subversion

One of my main draws to the idea of a QR code tattoo is the way in which it subverts one of the biggest parts of a tattoo – permanency. When you usually get a tattoo its meaning will be static – your tattoo celebrating your Khaleesi will always remain a celebration, even when you don’t want to celebrate her anymore. While the image of my tattoo will never change I can change what it represents on a whim by simply editing a html file on a server. The downside is that I’m locked into paying a hosting company for life – I’ve turned having a tattoo into a subscription service which is a pretty apt thing in our current technological dystopia.

Another thing I liked is how to a normal human the tattoo is meaningless noise when in reality it has meaning hidden to those who know how to look. When you use technology to decode it you can see that it actually guides you to a place that unveils something about who I am. I liked this disconnect between what a normal human experiences and what a human with the technology and know-how could experience. This aspect was inspired by a TED talk I watched years ago: We are all cyborgs now by Amber Chase. This video talks about how our reliance on technology makes us meet the criteria to be described as cyborgs, even though we haven’t literally implanted technology in our bodies. My tattoo I feel is a good representation of this idea – while it is itself literally implanted in my body it requires an external piece of technology to perform its function.

So, does this inspire you to get your own QR code tattoo? If so, here is some advice I would impart.

Like Loading...
This entry was posted in Off-Topic and tagged cyborg, QR Code, tattoo. Bookmark the permalink.

1 Response to I got a QR Code Tattoo!